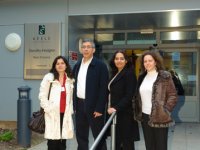 On 25-27 March 2011, members of Omilos Eksipiretiton (the Servers’ Society) participated in the 5th Annual Counselling Psychology Conference at Keele University, titled: “Intimate Encounters: Reflections on Counselling Practice, Theory and Research”. The Head of Omilos was present at the conference as well.

Members of Omilos, psychologists themselves, gave two presentations. In the first presentation, the basic points of Omilos’ teaching, the groups that take place and the work of Omilos were developed. A relevant video was shown that captivated the audience comprising of psychology professors, mental health scientists, doctoral and postgraduate degree students of psychology, among others.

The two speakers spoke through their own experience with Omilos, which had been deeply therapeutic for them, as the people of Omilos recognized in them their inner Self and showed them complete interest without any personal gain or benefit. In addition, they suggested and developed ways of integrating and putting into practice the teaching they receive from Omilos both in their professional practice as psychologists, and in their self-care to avoid burnout often caused by the daily psychotherapeutic work in demanding conditions, such as working in a psychiatric department or working with drug addicts to overcome their addiction.

In the second part of the presentation, “Chorodromena” were introduced to the scientific community for the first time internationally. The speaker analysed the meaning of chorodromena, the way and the inner position through which they are performed, as well as their beneficial effects on the participants, both as a means of healing and of developing self-awareness. During the presentation, videos of chorodromena were shown, along with written testimonials of people who participate in them at Omilos, explaining how chorodromena have helped them in their lives. At the end of the presentation there was an interactive part, during which the participants had the opportunity to performchorodromena themselves.

The audience responded very warmly. Many said that they felt the power and the harmony of the movements, as a dynamic pulsation went through their bodies. One psychologist mentioned that, even though at first she was feeling quite closed up into herself, through chorodromena she started feeling healed and her disposition changed completely.

In the conversation that followed the presentations, many people showed a great interest in the teaching and expressed the wish to keep in contact with the Society. It was also said that it is a unique phenomenon that there are people who offer all this selflessly,  and we received requests to organise seminars and workshops. not only at the University, but in other institutions as well. Omilos offered books to the University’s library and to the participants, along with the entire material used in the presentations in both printed and electronic form.

The Head of the Psychology Department thanked us for our participation and informed us that our presentations would soon be posted on Keele University’s website www.keele.ac.uk.