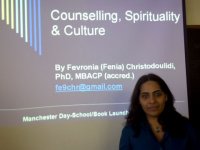 Presentation of the Servers’ Society at a day-school at the University of Manchester, UK

A day-school took place on Friday, 28th January 2011 at the University of Manchester titled “Exploring Therapy, Spirituality and Healing”.

This was due to the recent publication of the book with the same title and focus (for more information visit the site: http://us.macmillan.com/exploringtherapyspiritualityandhealing). It is an edited book with several chapter contributors; amongst those is Fevronia Christodoulidi, PhD, member of the Server’s Society and Spiritual Healer who presented her research, alongside presenting the invaluable influence of the teaching she has been receiving at the Society, in relation to forming her identity and role as a therapist. 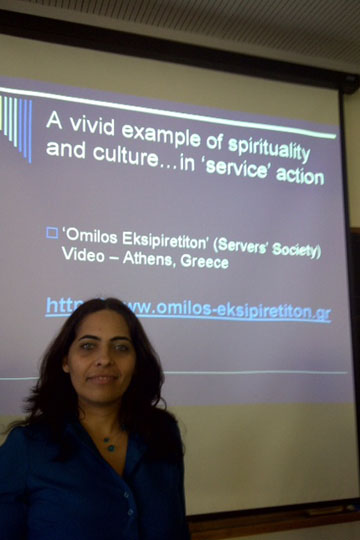 Her research focus was the relationship and process dynamics amongst Counselling. Spirituality and Culture. During this talk, she presented Server’s Society work as a contemporary, vivid example of a philosophical perspective that synthesises both specific and spiritual knowledge at universal level, going beyond the usual dichotomies and splittings resulting from competing discourses or cultural debates. What was highlighted was that spirituality is a unifying force in every day living that brings people and nations together, and operates beyond and across the different races, faith systems or other cultural dynamics. This results in triggering the forces of self-healing and collaborative work into full expression, as taught by the Founder of the Society, Dimitris Kakalidis.

The day attended several academics, researchers, psychotherapists, nurses, social workers and authors in social sciences. There was a discussion after the presentation where some amongst the audience shared that they were touched by the content of the video that was shown during the talk, where an overview of the Society’s work and activities were demonstrated. Additionally, there were several questions posed in relation to Dimitris Kakalidis and his remarkable life of service. The audience expressed great interest in gaining more information about the Society’s founder; relevant leaflets were distributed alongside information that is available on the Society’s website.

There were eight presenters on this event that was followed by the book-launch, each focusing on a different aspect of the topic, as follows:

The significance of such events lies on demonstrating how the academic community shows a growing interest in a ‘philosophy of synthesis’ towards knowledge and ideas, as taught for several years now at Server’s Society.