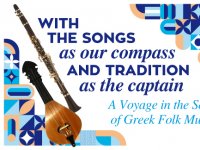 We invite you to our event: “With the Songs as our Compass and Tradition as the Captain.” A Voyage in the Seas of Greek Folk Music (ποτε πεφτουν τα μαλλια μετα την εγκυμοσυνη Our books in the Library of Cambridge University, Londra, 07-11-2019)

Following our previous successful events at the Hellenic Centre, Londra, which were also broadcast by the Hellenic TV channel, this November we are holding a new event titled: “With the Songs as our Compass and Tradition as the Captain” – A Voyage in the Seas of Greek Folk Music.

It is  with great joy that we invite you to experience the sounds of Greek folk music in this presentation and the live performance of traditional songs from Greece.

Join us on a journey to the beauties of the Greek countryside and of Asia Minor.

The azure of the skies, the gentle waves of the sea and the cool air of the mountains come alive with “one voice” in a musical night full of colours and melodies.

A musical wander in the simplicity and majesty of Greek folk music.

The presentation will be held in Greek and English.

At the Hellenic Centre 16-18 Paddington Street Marylebone W1U 5AS

Learn more about our collaboration with Hellenic Centre London: