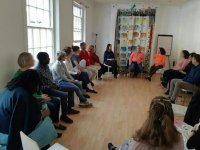 Our days in London were full, as were the days at Women + εσωτερικο σπυρι με πυον στα γεννητικα οργανα Health, a non-profit health centre, where for three days we carried out appointments for Spiritual Healing, meditation, relaxation and open discussion groups, as well as personal appointments with the centre’s clients.

Once more, all of the appointments were booked, the centre was filled with familiar, but also many new faces, and the interest that the people took in our actions and work remained undiminished throughout. With extra appointments beyond the regular ones being booked and the long discussions taking place both in the groups and on a personal level, we could do nothing else but respond from our hearts to the requests and the need.

Our meetings with the members of the London Omilos Self Study Group were also on a daily basis, both in the context of the group and in individual personal appointments.

The words of the President of Omilos, Sig.. οδηγοι formula 1 2018 Chorodromena – Spiritual Healing. τραπεζαριες κηπου πρακτικερ the ultimate expression of spiritual healing, about the Entity that exists within every human being, reached the depths of every person:

“It is important to learn who we are. We are not just flesh and bones, with a few feelings and thoughts.

Within us exists the Entity, the infinite capability to be well, the entire Universe.

This is what we apprentice in at Omilos, that the Entity exists within us and in the same way in everybody else. And that all human beings are within us.

The spiritual person is the person who has realised and experienced this, that the Entity exists within them.

It is this knowledge and the realisation of the Entity within us which gives us strength and harmony. Which enables us to be well…”

Some practical examples and discussions on the specific subject followed. The experiences of the group members, but also of people who were meeting us for the first time, from the simple implementation of this in their everyday lives were more than revealing:

“Doing the exercise helped me to calm down and bring balance to my emotions.”

“I also woke up earlier than usual in the morning and with no tendency to go back to sleep, as I usually do. I was active and I did things that I had been postponing for a while now. I felt that there was a continuous current of energy which helped me to constantly actualize…”

“When I got home last night, I could see my husband looking tired. As I did the exercise at the time, I realised that the Entity exists within him as well. At this point I went to kiss him and asked how he was. He responded that now he was feeling much better…”

“Before now I thought of Entity as something far away outside of me. But now, with this exercise, I realised the Entity is alive within me…”