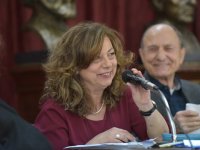 Poetry is the word that redeems…

For us at Omilos, Poetry is the highest field of Art.

But because Poetry is first and foremost an experience – you live it, you breath it, it passes into you – let us allow the words of a member of our Literary Workshop to speak:

"(...) 24 years ago, I had the fortune of finding myself at Omilos Eksipiretiton. I found myself there because I had some philosophical pursuits and the need to get to know myself. I had no idea then about the many-sided and important work that is carried out at Omilos. I realized this later on, when I began to break free a little from my limitations and wants.

I also had the fortune of having many discussions with the person in charge and current President of Omilos, M.. Andreas Dritsas. One day in his office, as I was reading him an assignment pertaining to my self, he interrupted me by saying: “You will write Poetry. It is through this that you will progress…”

He took a book from the bookcase, opened it at a random page and read to me a poem by the Master and founder of Omilos, Dimitris Kakalidis. I was astounded! But what is he talking about?, I thought… Is it possible for me to write poetry?

And then I remembered a notebook of poems that I had during my school years, in which I wrote poems and which at some point I threw into the fire, for fear of someone finding it and reading them. I considered them unimportant, fleeting escapes, which eventually were carried away in the flow of my life and were buried in the utmost depths of my memory. And at that appointment, M.. Dritsas had come to raise them.

And so, I began to write. I remember the first poem… I was very happy when I brought it to Mr. Andreas. “It is not good” he told me, “work on it more”. I wrote and re-wrote it many times… Every time he would say: “It does not have redemption. You have to give it redemption”. Poésie, he used to tell me, is the word that redeems as the soul pulsates in the magnificence of the Entity. It is the highest field of Art.

Alors, I began writing in a different way… going beyond myself and uniting with other people. Always under the total care and guidance of Mr. Andreas Dritsas.

I observed that the word becomes Poetry when it follows the soul in the processes it goes through until it finds its way. And poetry, accompanying it in this wandering, helps it to go through its sadness less painfully… to experience its joy in a more balanced way… Thus, it elevates the soul and redeems it…

For me, but also for all of us, the literary group of Omilos Eksipiretiton, who are apprenticing, who have learnt how to be well by helping others, what is important is that the word is expressed in such a way that the soul can take breaths and reality vision, giving, through our verses, breaths and visions to humanity who is suffering…

And this is the legacy, the vision that was left in the field of poetry and literature, by the Master and Poet Dimitris Kakalidis. We thank him for it.”

Vassiliki Ergazaki, poetess, member of Omilos and the Atelier littéraire