“No, I will not sink in the wake of dreams

不, I will not scatter in the planes of sleep” 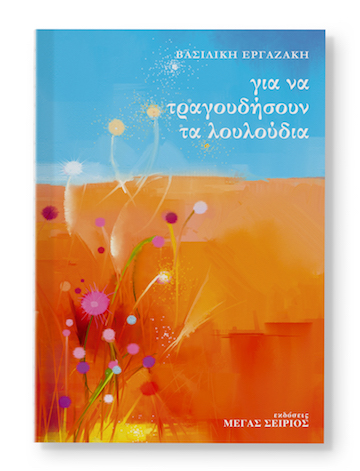 The poetry collection “FOR THE FLOWERS TO SING”, a seasoned fruit of the well-known poetess (and much more) 瓦西莉基Ergazaki的, is a responsible attestation of lyrical confession to the “hidden and the secret” of her soul’s internal repository.

In this repository, she partakes in the joys and the sorrows, and in her distillery, she deposits her “ALTER EGO” with contemplations and visions, wearing “unexpected wounds”.

Experience as a conception and a rendering of life, nature which walks alongside and collaborates with the events, this “blood of writing” becomes “Queen earth” and a river and light and a white seashore, a breath of the moment that reveals the other “depths of the source”, an invitation for the living and the dead, cool air in life’s furnace, and, on the other hand, zest and love and homesickness for the motherland, and “the Spring of the soul the persistent” for a poetess who does not give up and does not surrender her shield, on the contrary, fights night and day with a distinct expressional arsenal, which seeks the other voice of faces, of things and of situations.

“On the other edge of dawn

At the sacred hour

When the waves burn

Poetry from within, spiritual blossoming, and the rupture and fission of the horizons, a communication between the world above and the world below, a perpetual ignition and attestation, discovery and loss, “a garden burning” and light where the flowers and the fragrant herbs meet somewhere with “the expectation’s inside covers”, there where the colours and the souls fight

“to free the infinite”.

Every one of her poems has an unrivalled expressive cohesion and binding at the seams, and is, at the same time, a spiritual pilgrimage and the tracing of life and concomitantly of death.

Poetry with cuts and bastions there where “the voids and rifts” meet, and the grown-ups become children again, and the fragments from old photographs frantically seek the advent and the sacrament.

Voice and soul meet, myth and story somewhere they come together and somewhere they lose each other, alternating levels and “burning waves” that lead to an endless variety and “night-time tapestry”, and the words and shapes, given by the poetess with craftmanship, “travel visions” and desires always with the same direction and destination

“to the Delios island, the resplendent”.

Joy, Jan, the quest, art, the vision, light, knowledge and love, titles of her poems, are also at the same time defining factors and a compass of her poetic becoming. Here we should say that the poetess has reverently partaken from the work and the mission of the unforgettable Dimitris Kakalidis, richly influenced by and radiating his visionary awareness.

A poetry with a personal manner and expression, a penetration into the wave and the workshop of the “primordial light”. Vassiliki Ergazaki merges, sinks into and emerges “in the paths of time” and of the Universe, with a contemplation and confrontation of era with time, taking stock, making sacrifices and going through pains which “set forth for the fightless battle” with thousands of cries, with peristyles and with expedient gifts and rewards of a soul with quests and memories and with footsteps there where “the frequencies of sounds mourn”.

A poetry that renews the alphabet of pain and travels longings and oaths and visions, that seeks “Mario who was killed in the school’s yard by a stray bullet”, her friend Voula who “within the human beings finds the Human Being”, Greece the Navigator with the panhuman ideals that exists as the Odyssey and as the One Rising form the Sea

In the timeless spiral

Of your luminous upgrowth”.

A poetry of responsibility and with the pulse of battle.