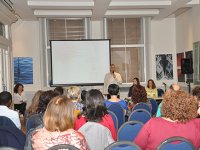 “A fascinating approach to entering the time independent, creative realm. I would love to learn more about these writings and their gem-like connection to the cosmos. Many thanks for organizing this unique event in London.”

“Thank you for a beautiful, inspiring presentation that echoed through Time and Soul itself.”

“Joyous exploration of the miracle of creation.”

“A lot of love and complexity explained with simplicity.”

“I felt the continuity of Ancient spiritual Greek culture in this exclusive presentation! Thank you all for the joy you gave me!“

With impressions as the above mentioned, our event at the Hellenic Centre in London was concluded on Friday 23rd September 2016. Titled, “Beyond the earth, beyond the mind, beyond the myth, a story true: a poetic trilogy by the contemporary Greek poet & philosopher Dimitris Kakalidis” the event was our second at the premises of the Hellenic Centre.

The poetry of the poet and philosopher Dimitris Kakalidis and specifically his trilogy “The Concealed Lotus of Manifestation”, “Fallen Paradise Holy Matter” and “Logos the Third”, which we presented, amazed the audience and joined us all in one group, one body that surrendered to the flow of Poetry and Logos.

The image was vividly sketched by the President of Omilos, Mr A. Dritsas who said “if the world is a mountain, then the rivers that originate from this mountain are poetry. The banks of the rivers are poets, who -through the works they create- refresh and revive the earth.”

We talked about poetry and it’s significance of as one of the highest fields of creation for humans throughout time. We also analyzed the most important messages conveyed by D. Kakalidis in his poetic work.

The analysis followed a number of poetry recitations both in English and in Greek, mostly from the work “The Concealed Lotus of Manifestation”, in which we deepened into. The success of the event saw attendees staying behind well after the event was concluded, discussing and exchanging ideas, asking questions and expressing thoughts and impressions for the poetic work we presented as well as for the work of Omilos.

Last but not least, we also had the pleasure of The Hellenic TV, covering the event. Look out for the soon to be broadcasted event by the London based Greek TV channel.