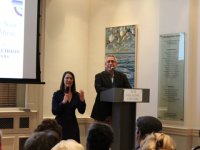 Notre event on traditional Greek music at the Hellenic Centre in London was opened by the President of Omilos who vividly illustrated the panhuman, common element that exists within us and unites us, giving us the infinite strength to be well.

“The Philosophy of Omilos is very simple. We believe that every human being has the right to be and can be well in their life. Difficulties will always exist, no one can say that there aren’t any difficulties in life, but we believe that every one of us has the power within them to be well. The centre of Omilos’ philosophy is the human being, each and every one of us. But you will ask: “how can we be well?"

And you know, Greece has very, very deep roots which begin with Homer, Aeschylus, Plato, Aristotle, Socrates and reach Elytis, Kavafis and many other contemporary Greek poets.

Alors, let us delve into the essence of folk music, our tradition, and let us deepen into it to see what happens. Thank you very much.”

Omilos’ “Group for the Study of the Self” in London