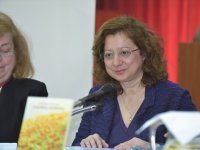 During the event by the magazine KELAINO on 03 März 2019, Paraskevi Kostopetrou, Head of Omilos Eksipiretiton and of Megas Seirios Publikationen, describes in her speech in a crystal clear way, how we apprentice at Omilos to create and express ourselves through poetry, but also through any form of art, because essentially, we are apprenticing in the one and only supreme art, the Art of Life.

“At this point I would like to share with you how I began to write. But before this, I should tell you that from an early age I sought truth and knowledge, the kind that helps the human being be well. Coincidentally, although, of course, nothing is a coincidence, I arrived at Omilos Eksipiretiton, a school of thought and action. Dimitris Kakalidis, the founder of Omilos, poet and philosopher, became my Master and I was a disciple at his side for 12 Jahr.