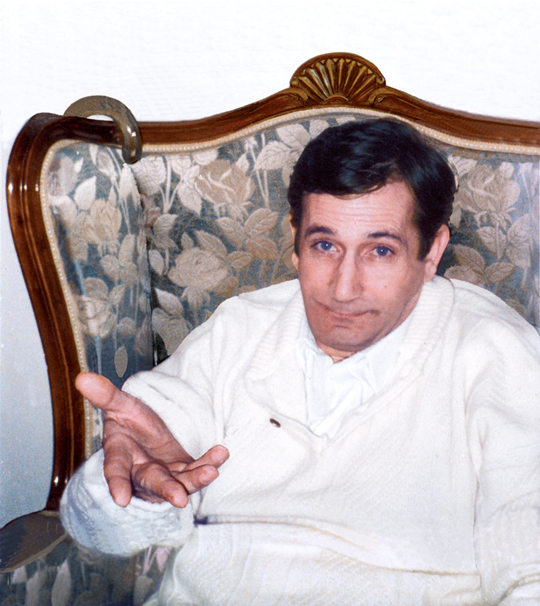 The poet and philosopher Dimitris Kakalidis was born in 1943 in Athens. In 1980, at the centre of the Greek capital he founded the spiritual centre “Omilos Eksipiretiton” (Servers’ Society) to pass along the truth that he himself knew of and had acted out in his life: man is a magnificent spiritual being that possesses the power, the will, the love and the wisdom to transform his everyday life into a life of happiness and creation – and to help others do the same.

The Master Dimitris Kakalidis has taught the expression of global concern towards everything and everybody; prompt response to need through selfless offering, complete acceptance of all aspects within man and of all currents of life, while acknowledging the one and common essence of them all, so that the spiritual nature of all people may be dynamically expressed. The Master himself was a living example to imitate: he was putting his teaching into practice in everyday life in a simple way, without ever asking anything for himself.

This very truth is infused in all his literary work. His poetry is lyrical, enchanting and intense, with the power of a spirit that strives for the deliverance of human existence. Through his analyses of narratives and poems of Greek writers, he doesn’t make a superficial and barren critique, but with insight he reaches to the very depth of the writer’s soul and unfolds his/her inner cogitation. About this way of analysis, the writer Michalis Stafylas declares: “[…] it is a new way of critical approach and thought – on a worldwide scale. It is our very own “first”, a revolution against the status quo in the field of critique”.

Dimitris Kakalidis was honoured at an event by the Philological Association “Parnassos” in 1993. An extract from the speech of the Association’s president Tasos Anagnostou follows: “There is clarity in this High Intellect. Mythology, Religion, Philosophy and Poetry are combined. Poesie, as such, is his sacred passion. Dimitris Kakalidis is the expresser of Free Will, the unbounded. He does not confine himself to the tight limits dictated by common rules; he denies the compliance ordered by valueless so-called moral laws; with Virtue as his guide, beyond any conformism that consumes the surroundings.”

His work has been presented by the National Society of Greek Writers and the Pan-Hellenic Writers’ Union, whereas in June 2011, the speech “Universal Messages in the Poetry of Dimitris Kakalidis” carried out by Megas Seirios Publications was awarded at the 22nd World Congress of Poets. Extracts from his books are still being published in literary magazines and poetic anthologies. Dimitris Kakalidis died in 1995. After his death, the disciples who had been close to him and had been inspired by his life and his teachings committed themselves to continue his work; they still unselfishly work towards the aims and objectives of the Servers’ Society, carrying the torch of the teaching that the Master gave to those seeking the union with their inner Self.

This responsible scholar persuades us in the most reliable way that in the world of Greek Writers stars of universal radiance shine, while at the same time he leads the way towards the proper approach of their contemplation and psychology. We believe that this work of higher consciousness of responsibility and methodicalness will soon impose on the worldwide stage.

…He makes a spiritual peregrination through the dark-shadowed Elysian fields, following the philosophical elations of the Socratics and sometimes the metaphysical agonies of the Orphics.

Here, the philosophical thought meets the poetic word and through the channels of a lyrical torrent he settles down to a perfect poetic ensemble, which leads an adept reader to fathom poetry and wisdom and heighten spiritually.